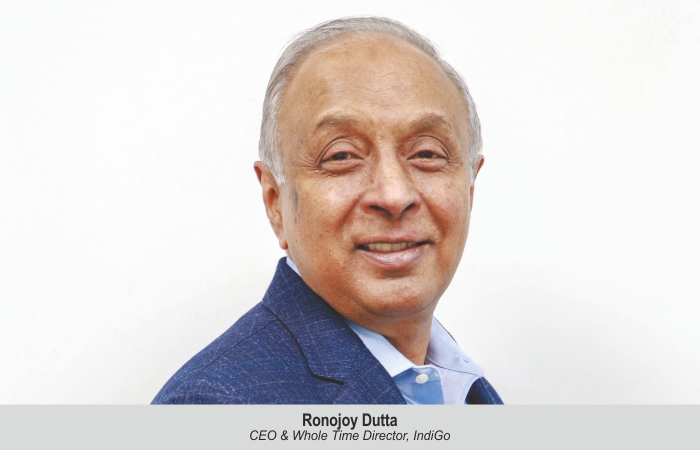 Ronojoy Dutta, CEO & Whole Time Director, IndiGo, shares how they are focusing on short and middle haul international flights despite a capacity increase in the domestic segment, and why privatisation of Air India is a much-needed move, beneficial to the country.

Just like all other airlines, the pandemic, and the subsequent lockdown hit IndiGo hard as well. Ronojoy Dutta, speaking at CAPA Live, agrees saying, “We dropped from 1,200 departures in February to 350 departures by May. We went up as high as 420,000 in May, per day increase to 20,000 per day increase, now. With COVID numbers being down, things are looking better again.”

Inidgo is focusing on international, especially the short and medium haul sector. “Internationally, after the government opened Doha, Dubai and Sharjah, things are much better. My next push is to get Saudi and Thailand to open because those are important markets for us. Hence, international is still lagging at around 35-40 per cent,” he informs.

“I’m very strong on international because we have a fantastic geography and a four-corner strategy. We can fly seven hours from Delhi, Mumbai, Chennai & Kolkata, which gives us a circle that goes to Moscow, Barcelona, Nairobi, Manila, Beijing, Shanghai. That’s a very wide and high-growth circle. Most of the traffic right now is carried one stop. COVID has shown us huge amount of demand from places we hadn’t considered on our radar earlier, like the CIS countries, Milan or Manila. We are going to go non-stop to all these places,” he adds.

Dutta agreed that there is a big debate regarding scheduled flights versus bubble arrangements. However, he says, “I think the issue in the government’s mind is once you get to schedule, you get so much connectivity at the other end, you don’t know where people are coming from. With bubble between two countries, we know it’s point to point and gradually, I’m sure they’ll open. Starting tourist visas to people coming to India is good. I’m quite supportive of the way the government is doing things gradually, step by step. Let’s take it in a measured way instead of a big bang,” he pointed out.

Dutta believes that they are in a strong position to compete with full-service carriers in the future. “No one prefers a non-stop flight over a one-stop flight. Non-stop flights are more expensive since more fuel is carried and used. As a result, you’ll need some differentiation to make it work, which was difficult to come by in the past, but today people are afraid to stop anywhere in the middle. As more people travel non-stop, the one-stop route through Frankfurt, Dubai, and Doha will decline, but we are also competing in the local market. As a result, it’s beneficial for us to simply take a shot at all of these hubs,” he stressed.

At a recent meeting in Boston, Dutta revealed that the focus was on emissions and carbon footprint. “The airlines are united in their commitment. By 2050, we will be carbon neutral and each airline is taking steps. There are three avenues to being carbon neutral – to reduce emissions; go to sustainable aviation fuel; and offsets. The emission and the offset can be done immediately. Sustainable aviation fuel clearly needs a lot of technological breakthroughs from fuel manufacturers. In the last five years, emissions have gone down for IndiGo by 16% as we are getting more fuel-efficient engines.

While working with the government, we are doing more straight-line flying and have made significant progress in lowering flight times and ground emissions. We have a very strong programme with the government to construct mobile gas facilities. The problem is finding a long-term solution for aviation fuel. Whatever is available is about three to four times more expensive than fossil fuel. “We’re collaborating with the Petroleum Institute of India on some test pilot projects,” he said.

The privatisation of Air India, according to Dutta, is a positive step. “It was supposed to happen a long time ago. It’s beneficial to the country. Air India is sitting on a lot of bilateral rights, and not using them. As we expand internationally, we’ll face challenges. That’s one problem. Second, I believe they are becoming more fiscally prudent. It is not healthy competition for us to have a huge opponent who is supported by taxpayers. I’m overjoyed and relieved that this is taking place. We are a strong contender on the international stage. Domestically, they now have three carriers—Vistara, Air Asia, and Air India—all of which will be fierce rivals. In terms of international competition, it will be a wide-body, long-haul Air India vs a narrow-body, short-haul IndiGo battle. As a result, we won’t be going head-to-head to the same extent. They’re huge on India to the US and UK. The Bangladesh, Kathmandu, and Thailand routes are essential. As a result, I don’t believe we’ll be going head-to-head right away,” he continued.