‘We need a universal solution’ 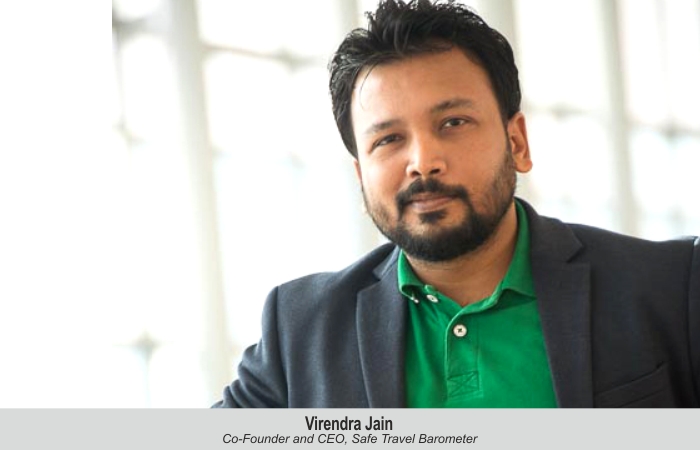 Ideas such as health passports will be a foundation to ensure safe cross-border travel. But it’s going to be a long time until governments decide on a universal solution, says Virendra Jain, Co-Founder and CEO, Safe Travel Barometer – a B2B solution that monitors and benchmarks traveller health and safety measures.

How are different destinations responding to fully vaccinated international travellers?

As countries reopen to travellers, most destinations want to maintain and safeguard health security within their borders. Accordingly they are striking a balance between the share of their own population inoculated before opening borders to international travellers. We’ve seen this play out in Israel and Seychelles, for example. We are also observing similar statements or sentiments made by Thai and Canadian governments, wherein they want to achieve a certain share of their population fully or partly vaccinated before reopening for tourism.

Concepts such as health passports will be a foundation to ensure safe cross-border travel. But it’s going to be a long time until governments decide on a singular, universal solution which strikes a balance between user privacy and verifying their health status, which now is a critical health security matter.

Give us a perspective on how airlines are faring and some of the things they are doing right that will serve them well in the next 1-2 years.

Airlines have certainly matured in their incorporation of specific initiatives from a COVID-19 health and safety perspective. We strongly believe that aspects related to personal and health hygiene will become a norm. Bear in mind that only a fraction of the world is currently fully vaccinated and it’s going to be a multi-year affair to hit a critical mass, notwithstanding the evolving mutations. Health safety initiatives will be incorporated in various lifestyle aspects including but not limited to restaurants, hospitality, airlines, tours, etc.

How will cruising restart going forward? Will 2021 see the early signs of revival for cruising?

We have already witnessed river cruises restart in a controlled environment within Europe, and the recent guidance by the US CDC is encouraging towards restarting cruises for the fully vaccinated. Specific to the US, there is an ongoing tug of war between federal and various state governments regarding the use of vaccine passports & discriminating non-vaccinated travellers from cruising.

Why don’t travel bubbles consistently work? Will they work better when travellers are fully vaccinated?

Once again it could potentially be narrowed down to every country thinking what’s best to maintain and safeguard health security within its own borders. You’ll find countries across a range of preparedness per se, to handle an outbreak while balancing with its vaccination rollout.  It’s a dynamic tandem between lockdown versus preparedness. Countries which are reopening to others are primarily assessing COVID-19 infections trends, share of population vaccinated and ultimately if the vaccine is recognised by the destination. Historically, major source countries such as India, China, and others need to align themselves to the above in order to be reconsidered as a safe source country.

Your views on vaccination tourism? Is it a viable business proposition for tour operators?

Vaccine tourism may not be directly commercialised by governments or tourism departments for the obvious reasons of prioritising vaccination of its own citizens. However, travellers have given impetus to the concept of vaccine tourism, simply because they have travelled to another part of the country or the world to get their jabs. We are also seeing early glimpses of domestic vaccine tourism wherein people are travelling to nearby cities or crossing state borders to get their jabs.