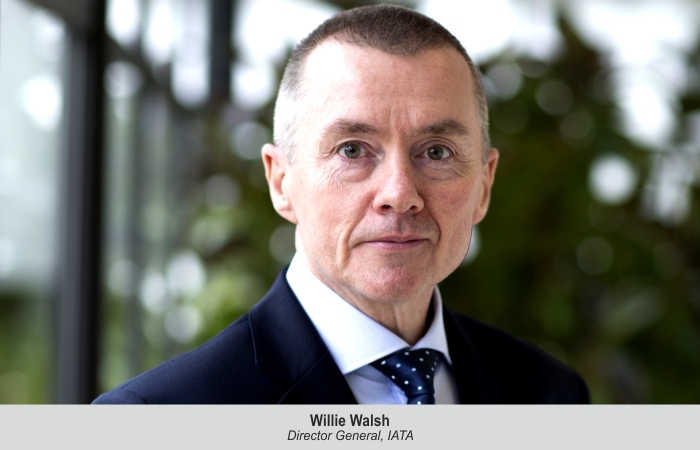 Aviation industry needs to be clear with governments on what is needed from regulations, it must deliver on commitment of net zero emissions and improve gender diversity, says Willie Walsh, Director General, IATA, while presenting the association’s annual report at the AGM.

The aviation industry is on course of recovery. “Aviation is resilient; and we are rebounding,” said Willie Walsh, Director General, IATA, while presenting the association’s report at the annual general meeting in Doha recently. “Our industry is now leaner, tougher and nimbler. Our latest analysis shows losses in 2021 close to $42 billion, a huge loss, but down from our earlier estimate of $52 billion. And we now believe that global losses will be cut further, to $9.7 billion this year. Industry-wide profit should be on the horizon in 2023,” he claimed.

However, he insisted that while the outlook is positive, the business environment is challenging. Highlighting four challenges, he said, “Everyone must learn the lessons of Covid-19. We need to be clear with governments on what is needed from regulation. We must deliver on our net zero emissions commitment, and it has never been more important for us to improve gender diversity.”

He said, “The immediate priority is working together with governments and airports to address capacity issues. Let’s be clear, these problems don’t exist everywhere, and solutions are already emerging. The longer-term priority is ensuring that governments work much more closely with airlines in the next crisis—whatever that may be.”

In terms of regulation, Walsh highlighted that there are three areas are of particular concern—slots, accessibility, and consumer rights.

He pointed out, “We don’t oppose regulation, but it must create solutions, not add to problems. In October, I reported on the egregious attempts by infrastructure providers to raise charges. The nightmare is becoming reality. Focusing on airports, out of the top 100, more than half announced increases for 2022 and 2023—expecting their customers to make up for revenues they did not get during the pandemic. In fact, Airports Council International reports that aeronautical revenues for airports were $99 billion in 2019.”

Speaking on sustainability, Walsh reminded everyone, “At our last AGM we took the monumental decision to achieve net zero emissions by 2050. Now, we must turn our commitment into carbon reductions. We currently expect 100 per cent carbon abatement with 65 per cent through SAF, 19 per cent through offsets and eventually through carbon capture. Also, 13 per cent from hydrogen and electric propulsion that Airbus, Boeing, and other manufacturers are committed to delivering by 2035 and 3 per cent should come from more efficient operations.”

Talking about operational efficiencies, he said, “Governments also need to do their part. Airlines have committed $17 billion in forward purchase SAF agreements. Irrespective of price, airlines have used every drop of SAF in 2021, and it will be the same for this year. Fortunately, airline demand has stimulated an exponential increase in SAF production.