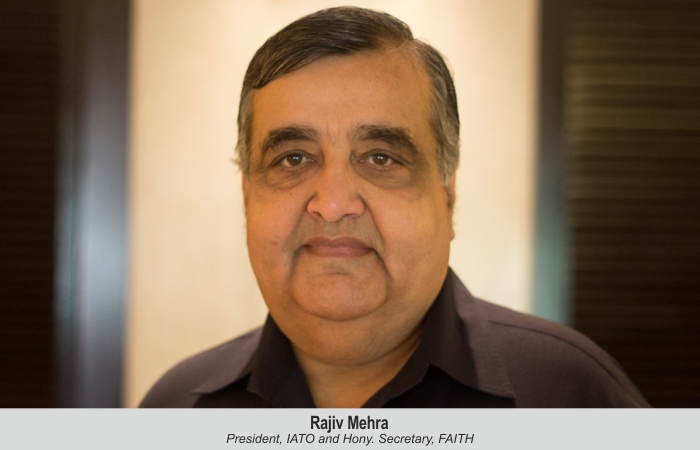 Rajiv Mehra, President, IATO and Hony. Secretary, FAITH, along with a delegation of tourism association representatives, met the new Tourism Minister G Kishan Reddy and apprised him about the  trade in India. Mehra believes that the trade will now be able to voice its matters even better.

Sharing details about the meeting, Rajiv Mehra said, “On the first day when the new ministers took charge, we met Minister Reddy. I was representing IATO as President as well as FAITH as Hony. Secretary along with its Chairman, Nakul Anand and IATO Vice President, Ravi Gossain. The delegation also included Jyoti Mayal, President, TAAI and Vice-Chairperson, FAITH and PP Khanna, President, ADTOI and Board Member, FAITH. We had a very good discussion with the minister. We apprised him about the associations that look after the tourism trade in India. He talked about a lot of things and said that the next most important task for the ministry would be to work towards opening up international borders for tourists. The minister also said that once he assumes full charge, he will call up a meeting with the trade to discuss the problems the associations are facing and have them sorted out. To us, he seemed very positive about our issues. We were in touch with him before as well when he was the Minister of State for Home Affairs. I think, under his guidance, the Ministry of Tourism as well as tourism in India, once international borders open, will definitiely flourish. I hope he will listen to the trade and help us in the best way possible. As far as the two other Ministers of State for Tourism are concerned, we have not met them yet but we will soon call on them and fix a meeting.”

On how three Ministers looking after tourism will impact the working and dialogue with trade, Mehra said, “Now with three ministers at the helm of affairs at the Ministry of Tourism, I think we will be able to put our voice more strongly and I am hopeful that things might move faster. Only time will tell.”

Talking about IATO’s activities, the President said, “We are going around with lot of letter writing to the various ministries for relief measures weather it be SEIS or other issues. We are in touch with Ministry of Commerce, SEPC and Ministry of Finance day in, day out. Regarding the functioning of the association, most of our regional chapters have had their first meeting with members in the respective regions in each state.”

He also informed that IATO has made new sub-committees. “We have also made different sub-committees to look after different issues and to recommend to IATO Executive Committee on varied matters. Their meetings have also started and five out of 12 sub-committees have already held their first meeting. As the IATO President, I was also called to give a presentation for the BRICS Tourism Ministers Meeting. Moving forward, our next target is now to get over the problems faced due to TCS as it should not be levied on foreign tourists and also look into the aspect of starting scheduled international flights as soon as possible. We are working on these issues with the Ministry of Tourism, Ministry of Health and Ministry of Home Affairs,” he informed.

On international marketing strategies of MOT, Mehra said the first campaign will be starting from July 17. “I think it’s better if the Ministry of Tourism officials reveal more details about the exact programme, but it is a good sign that tourism promotions are starting in the overseas markets. India should remain in the mind of people and as soon as we lift the ban on e-tourist visa and international scheduled flights are commenced, we should see travellers ready to visit India,” he stated.

Mehra has also requested that the requirement for RT-PCR test for fully-vaccinated  travellers be removed for inter-state travel.