The tide must turn! 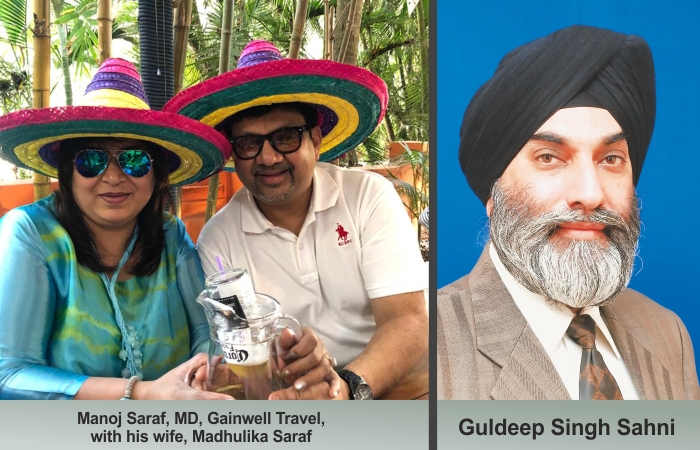 Coming from a family of entrepreneurs, Manoj Saraf, MD, Gainwell Travel,has business in his blood and travel in his heart, and these two things have made him achieve many successes while making sure he lives life to the fullest.

The travel bug bit me early,” says Manoj Saraf who is the third generation in a family of entrepreneurs with business spanning the automobile and construction material sectors. Schooling, for Saraf, happened in Darjeeling at St. Paul’s, post which he graduated from St. Xavier’s, Kolkata, followed by a Masters from the US.

As a student, Saraf had many passions, one of which was car rallies. “Not many people know that I enjoyed car racing and I even wanted to become a race car driver at one point. In my early 20s, I participated in some car rallies, mainly the MRF monsoon rally in eastern India and even the Himalayan Car Rally. However, at that point the rally scene in India wasn’t professional and my family wasn’t very keen on me pursuing it. Hence, I had to stop,” he reminisces. Today, though car rallies are out of the picture, he does still enjoy taking the car out on long drives. “I explore places while driving not only in India, but also internationally. I have driven all over Europe, America, Malaysia and many other countries,” he shares.

Another sport that Saraf enjoys is the ever-favourite cricket. He was even part of both his school and college teams. “Besides playing and watching cricket, I love travelling abroad to see cricket matches in London, Abu Dhabi, Australia, etc,” he adds.

“When we started Gainwell nearly 30 years ago, it was actually a passion for travel and because my wife Madhulika wanted to do something on her own. It started with an all-ladies team, when my wife got together with some professionals. This gave us a headstart. In 1991, when we got our IATA accreditation, we threw a huge cheese and champagne party, where we invited almost all of Kolkata to the Oberoi Ballroom,” he enthusiastically shares. And while Gainwell began as a means to utilise time and have some fun while at it, The company soon began picking up as a larger scale business and the entrepreneur in Saraf took over. “One must ultimately run a business like a business,” he says.

Sports tourism is something Saraf has started with his son Manav, who joined Gainwell a few years ago. “Manav is a sports enthusiast and both of us love watching cricket and other sports together. Hence, seven years ago, we started Gainwell Sports and we became the official agent for the ICC World Cup in England and thereafter the World Cup in Australia, which got postponed. We even plan to do the football world cup and other big sporting events. The youth wants live stadium experiences,” he exclaims.

So how does the ever-busy Saraf wind down? “I love watching movies, listening to music as well as singing. I even tried my hand at cooking during the lockdown. I also help my wife in gardening. My mantra is that if you are working hard for eight hours, you need to party harder the other 16,” he shares.

Professionally, one of the biggest achievements, according to Saraf, was when they accomplished handling a big group to Singapore on Star Cruises. “We had 1200 people on board, coming on 14-15 different flights. There were two truckloads of luggage (around 1500 pieces) to transfer at 10-12 different hotels and not a single piece was lost. It was a very satisfying experience to take 26-27 buses for sightseeing and to restaurants. They also went to Malaysia later. After that, groups of 500-600 people used to be a breeze for us. I believe that travel has a lot to teach and logistics is one of them,” he shares.