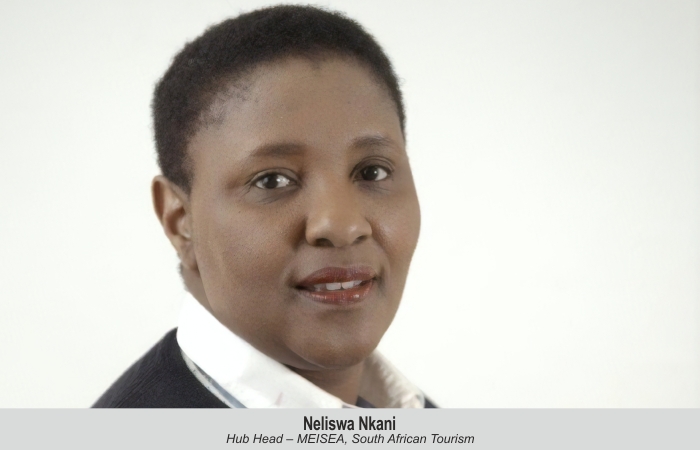 Neliswa Nkani, Hub Head – MEISEA, South African Tourism, discusses the NTO’s tweaked strategy with some new focus areas as well as its renewed attention to bring in e-visas. South African Tourism is also playing an active role in ensuring that the costs to visit the country remain realistic despite the pandemic.

Has there been a change in strategy for SAT for the India market?

Yes, the pandemic has changed the way we view and sell travel.It has forced us to become more digitised, more streamlined, and has essentially accelerated the future. This year, ahuge focus area for us will be mobilising niche segments in India such as biking groups, runners, travellers who want to do self-drives, etc. The fact that Indian licenses are valid in South Africa is a huge bonus!

We will also be promoting new regions and offbeat destinationswith safe experiences. Weanticipate that South Africa’s new regions and geographies will be a hit with Indian travellers in the second half of 2021 as well as in 2022. For the next couple of months, travellers can enter through cities that have restored international connectivity. Which mean they can either enter through the Mother City – Cape Town, Johannesburg or Durban, and use these cities as a gateway to the rest of the new regions, including the stunning and relatively unexplored Port Elizabeth, Robertson, West Coast, Drakensberg in KwaZulu-Natal, Panorama Route (Mpumalanga) and Garden Route.

We are aware of the effect the pandemic has on the global economy, and have been repackaging accordingly, with the intent to offer consumers’ excellent deals and discounts. Safety measures are transparent and well-communicated, and have been factored into overall packages, so that there is no surprise or extra-cost to travellers. We are also in conversation with several airlines to figure how we can best optimise and reduce travel costs.

How have you engaged with the travel trade in India over the last year?

We have been constantly communicating with key travel agents and tour operators directly through two-way knowledge exchange webinars, while also conveying timely and focused destination updates. South African Tourism India been invested in virtually training over 150 trade each week – across all travel verticals. SA Specialist, our interactive online learning programme, has witnessed an increase in the number of Indian travel trade undertaking the training, as trade agents are using the pandemic period to upskill and reskill themselves. At present, we are in the process of setting up a platform for the Indian trade to interact directly with Provinces and local tourism boards in South Africa – we hope to unlock mutually profitable synergies through these associations. We also hope to rework itineraries to ensure consumers get value-driven packages.

Is South Africa open to travellers from India on tourist visas?

South Africa is open to travellers from across the globe, including India. Presently, all travellers intending to visit the country will be required to produce a negative PCR (polymerase chain reaction) test, not older than 72 hours from the time of departure from the country of origin to South Africa.

Tell us about the new focus on film tourism from India market.

Even before the pandemic we were looking at leveraging film tourism, and have been in talks with big banners in India. We look at assisting our partners with securing easy shoot permits as well as advantageous and competitive pricing.