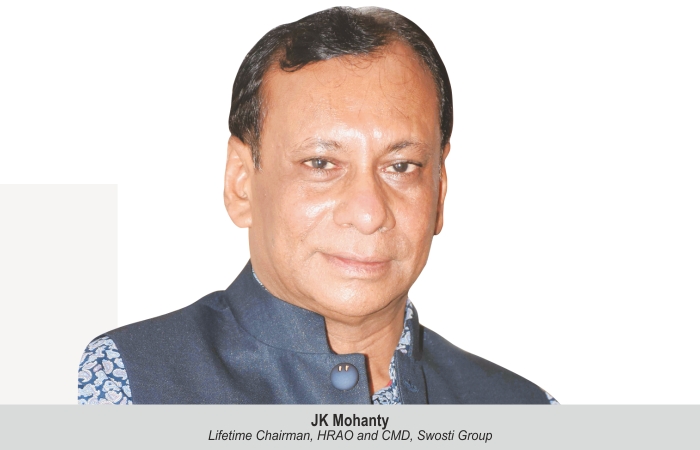 JK Mohanty, Lifetime Chairman, HRAO, says more international flights from Odisha are need of the hour and once they start operating, inbound tourism is bound to revive in the state. Unless more international sectors open up, tourists from Europe and United States will give Odisha a miss.

JK Mohanty, Lifetime Chairman, Hotel and Restaurant Association of Odisha (HRAO) and CMD, Swosti Group, said, “More international flights from Odisha are need of the hour and once they start operating, inbound tourism is also bound to revive. Unless more international sectors open up, tourists from Europe and US will give Odisha a miss. For tourism sector to become robust, international flights should start operating from Bhubaneswar airport. The Union Ministry of Civil Aviation needs to look at this matter.”

“Odisha has an international airport at Bhubaneswar, and the government has given the green signal for another one at Puri. The Sri Jagannath International Airport at Puri would be completed in three years. Once these airports are ready, we need international flights to bring foreign travellers to the state,” he said.

It is quite unfortunate that Odisha has not received its due share in the Incredible India campaign. There are a plethora of tourist spots which appear nowhere in the campaign,” Mohanty quipped.

He said Jharsuguda and Rourkela are already connected by air. “Jharsuguda is an industrial belt in the state. Previously, one UDAN flight was launched from there, but today it has more than 16 daily flights. Rourkela airport has also opened up and Odisha government led by Chief Minister Navin Pattnaik is constructing the largest hockey stadium in India in Sundargarh district. The stadium would be ready by this October. Local hockey players would soon rub shoulders with international hockey players.”

On his election, Mohanty said, “I have been the Chairman of HRAO since 1984 and this year, I submitted my resignation, so that young blood can take the association forward. But the members unanimously elected me as Lifetime Chairman and the post of a Working President was created by me for a much younger person who can take the association forward in the years to come. I am thankful to the members.”

The HRAO was formed in 1984 with only six members. “Today, we have more than 300 members, including hoteliers, consultants, tour operators, associate members such as chartered accountants, company secretaries among others. The objective is to build a healthy hospitality and tourism industry in Odisha. So far, HRAO activities have been sourcing information of the industry, finding out the problems of the hotel industry and coordinating with the central and state governments to facilitate the members for the growth of the hospitality and tourism sectors of Odisha. This apart, we have expert members from eco-tourism, adventure tourism, ticketing and airlines. These associate members contribute a lot when we had the Odisha Tourism Conclave which is an annual feature wherein experts from various fields also participate. The recommendations of these experts are forwarded by the HRAO to the state and central governments,” he said.

Mohanty, who is also CMD, Swosti Hotels, agreed that the hospitality industry has revived and is doing well now. However, the hotels and hotel chains have incurred huge losses due to COVID-19. “It will take at least five to six years to recover from the losses. Besides, even though the sector is on the path of recovery, shortage of skilled manpower has hit us like a Damocles sword. We need more hotel management institutes in the state to churn out skilled manpower. “It is a pity that the government has not given the infrastructure status to the hospitality sector. If the sector gets it, we would get long term loans, tax concessions, cheaper rates of interest and more quality hotels could be built in India. That will make us competitive compared to countries such as Thailand, Singapore and Malaysia. What we need now are quality hotels,” he said.