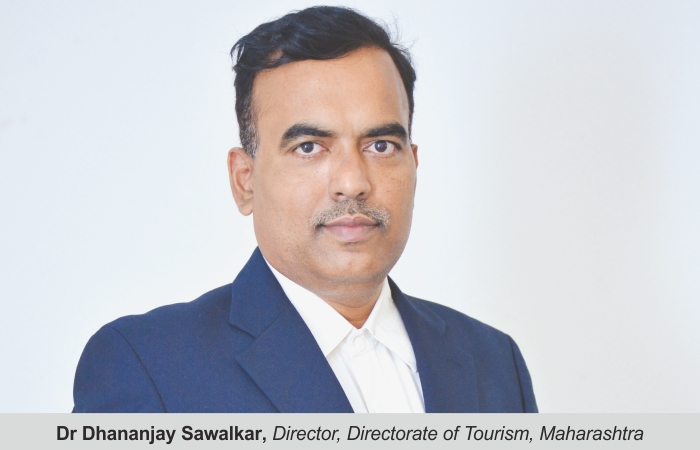 Maharashtra has been using the time well and is developing new tourism spots in the state for travel agents to sell. Dr Dhananjay Sawalkar, Director, Directorate of Tourism, Maharashtra, tells us more.

In a bid to promote tourism, the state’s tourism board has decided to develop seven properties of Maharashtra Tourism Development Corporation by private parties.In the first phase, MTDC’s resorts at Ganpatipule, Matheran, Mahabaleshwar, Harihareshwar and Mithbav, and vacant plots at Tadoba Tiger Reserve and Furdapur (Aurangabad), will be developed in partnerships with private players. “To promote this, we have been constantly engaging with travel agents through various activities and events. We were planning to organise a familiarisation tour for the trade in March to showcase Wai’s film tourism. But due to the current scenario, we have postponed it,” says Dr Dhananjay Sawalkar. Wai is one of the prominent tourism destinations in the state, and has been featured in more than 250 films and television shows including Bollywood, Marathi and Bhojpuri films.

In terms of increasing tourist arrivals in Maharashtra from other states, he says his team is focusing on two things – publicity and promotion. “Apart from aggressive promotions, we have thought of arranging Maharashtra Travel Mart, where we will invite outbound tour operators from all states who could be potential buyers of Maharashtra’s tourism products. We will showcase our products to them and arrange B2B meetings between the outbound and inbound tour operators of Maharashtra,” Sawalkar adds.

The state government’s tourism department has also announced 20 mini festivals across the six regions of Maharashtra, i.e. Konkan, Pune, Nashik, Aurangabad, Amravati and Nagpur, to boost tourism. The idea is to help tourists explore the state and celebrate its cultural heritage. “However, in light of the current situation, we are looking at postponing a few of these festivals to maintain the overall well-being of travellers,” Sawalkar reveals.

He adds that the focus right now is to spread awareness about lesser-known places in the state, especially for travellers who are seeking less-crowded locations. “We are collating data of such stand-alone destinations that can be visited as weekend getaways and larger theme-based itineraries for longer duration holidays. Domestic tourism is surely making a come-back,” Sawalkar adds.

The Maharashtra tourism department has approved several major policy decisions to boost tourism. “This includes the ‘Beach Shack Policy’ which will encourage locals living on the coastline of Maharashtra to open beach shacks, serving as local hangouts/eateries for tourists. The ‘Agri-Tourism Policy’ will facilitate homestay in farms and encourage villages to open their lands to tourists who want to engage in organic lifestyle experiences like strawberry-picking and mango-plucking. In addition, the tourism department also sanctioned the ‘Caravan Tourism Policy’ which is aimed not only at providing a different experience to travel enthusiasts but also promoting tourism in the state’s remote areas and create job opportunities. We will soon be announcing initiatives to promote wellness tourism for a holistic wellness sojourn in the state, and adventure tourism by highlighting locations that are replete with adrenaline-pumping activities,” Sawalkar shares.

Mumbai as a destination

We want to promote Mumbai as a top destination in the country, Sawalkar says. “Under the guidance of Tourism Minister Aaditya Thackeray and our Principal Secretary Valsa Nair, we are trying to open up the colonial heritage structures which weren’t accessible to tourists earlier. For instance, we recently opened up the Bombay Municipal Corporation (BMC) heritage building to tourists. We are also going to open Wankhede stadium, the General Post Office building, High Court building, Vidhaan Sabha, etc. These are all iconic structures,” he adds.

In the past, Maharashtra did the illumination of the world heritage building – Chhatrapati Shivaji Railway Terminus. “We have now planned something similar for 10 iconic structures of Mumbai. We have also planned to revamp the Gateway of India and showcase various forts of Mumbai like Bandra Fort, Sion Fort, Sewri Fort, Mahim Fort, and Worli Fort,” Sawalkar says.