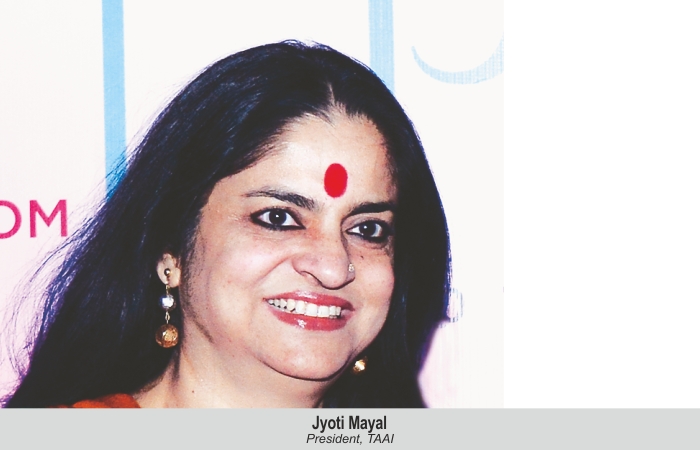 Jyoti Mayal, President, TAAI, is positive that the new ministers would accelerate decision making and that with cooperation between government and industry, a lot can be achieved. She also hopes that the Ministry’s focus shifts from Air India to the plight of the industry ever since the virus entered our borders.

Now that Ministry of Tourism and Ministry of Civil Aviation have got cabinet ministers, the industry is pinning hopes and expecting faster decision making. Jyoti Mayal has said that by appointing three ministers for tourism (including one cabinet minister), three ministers for culture, and two ministers in civil aviation, the Prime Minister has given a heavy-weight focus to tourism. “We always had a lot of expectations from MOT, but now being given a cabinet berth, we expect quicker decisions. This is because the government is looking at tourism as the industry which would quickly revive the economy; else, the PM wouldn’t have put so much of manpower into it,” she said.

She also pointed out that giving tourism a cabinet berth was one of the points mentioned in their open letter to the PM. “Also, we requested for MOT to have a helpdesk, which will coordinate all decisions after taking inputs from concerned ministries. I think, that will be done by the newly constituted Ministry of Cooperation, so that this industry develops much more,” believes Mayal.

The TAAI President also shared that even at MoCA, it’s wonderful to have two ministers, with one being cabinet minister Jyotiraditya Scindia. “Over the last one year, we have noticed that the focus was a lot on Air India and we were not given the same importance despite having many meetings with them. I think it’s time to move forward and look into the issues that we are advocating as an association because we feel there is lot to be done, including protection of our money from defaulting airlines. We need a very efficient statutory body as well as our remuneration back. It should be like MRP on any other consumer product, and we should be protected and move forward. There should be many different policies, which will be coming with more deliberation and more interaction with the industry,” she said.

While the Secretary has spoken about SEIS payments being underway, Mayal said that SEIS is the right of the travel and tourism operators. “The government should have paid back this money much earlier and there shouldn’t have been any need for different states to go to court. I believe, mutual cooperation is needed in such cases. MOT has worked towards it and I know the Secretary has been working diligently on this. We have got the news that the money has been granted for SEIS, but I only hope that it happens in the best way and is distributed without any gaps,” she asserted.

Mayal recently launched Women in TAAI and Travel (WITT) platform, which is very close to her heart. Sharing details on how they will be working in this regard, she said, “We have started working closely and we will roll out a plan for the next six months at WITT. We are very excited about how to take this forward. I have been also making a document or White Paper for the plan forward. We need to focus on a few things immediately, which includes development of tourism for the women in this country and side-by-side skilling, which we have started since I am the Chairperson of THSC. We’ll soon be rolling out for the entire industry a quality pack as a small course, through which they can learn skills and upskill more. We are also taking inputs from the industry, in terms of what would they like to be skilled in.”