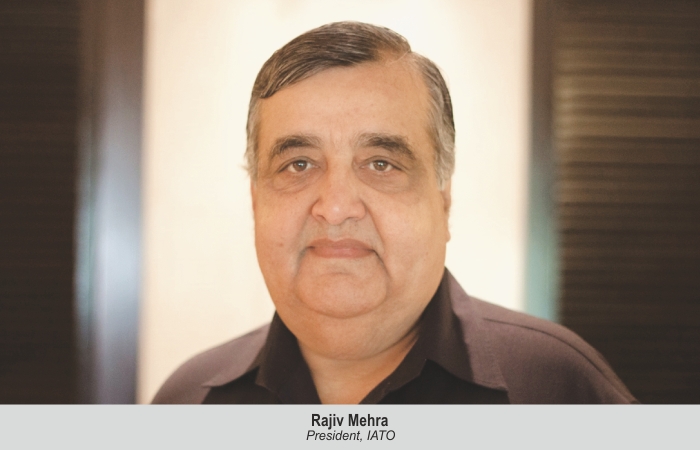 IATO is thankful to Union Finance Minister, GST Council and Chairman of CBIC for accepting its two recommendations — removal of GST on services provided outside India to foreign tourists and GST for ferry service hired for transport of passengers, says Rajiv Mehra, President of the Association.

The Union government has accepted IATO’s two recommendations — first, the removal of GST on services provided outside India to foreign tourists if they take combined package of India and neighbouring countries and second, GST for the ferry service hired for transport of passengers, including tourists used as public transport from point-to-point transport in Andaman & Nicobar Islands.

Elaborating on the issue, Rajiv Mehra, President, IATO, said, “We have been recommending to the Ministry of Finance for the last couple of years in our budget recommendations to remove GST on services provided outside India to foreign tourists if they take a combined package of India and outside India. We thank the government for considering our request favourably and giving a clarification that service provided by an Indian tour operator to a foreign resident for a tour partially in India and partially outside India is to be subject to tax proportionate to the tour conducted in India for such foreign tourist subject to conditions that this concession does not exceed half of tour duration.”

In its budget recommendations, IATO had also requested for exemption or reducing GST on private ferry tickets at Andaman considering that these transport ferries operating in Andaman and Nicobar Islands are not luxury/ tourism ferries or cruise, but they are used as means of transport and is only source of connectivity between small islands and Port Blair. “The government has considered this too favourably and clarified that there would be no GST for the ferry service hired for transport of passengers, including tourists used as public transport from point-to-point transport, including in Andaman & Nicobar Islands,” added Mehra.

“IATO hopes with these amendments/ clarifications, inbound tourism to India would revive faster and we will not lose business to our neighbouring countries. This will help in regenerating employment in tourism sector and boosting foreign exchange earnings for the country,” he claimed.

Mehra also pointed out that they are paying 5 per cent GST on hotel accommodation also, which is 12 per cent or 18 per cent of the tax, which we are already paying. “Our request was that let the government charge 18 per cent on our deemed 10 per cent profit or 10 per cent markup. So, this is still under consideration, according to my sources in the ministry, as this has not been dumped, but has been kept and might be considered whenever we meet again,” he said.

Talking about the SEIS, which the government is not willing to continue with, Mehra said, “SEIS not being continued is an old story and we have realised this in the last two years. We have been writing and talking to Ministry of Commerce and Ministry of Finance that at least for the tour operators and travel agents, five to 10 percent of duty drawback or something should be given on whatever they earn in foreign exchange. However, nothing has happened. There has been no headway and it seems that the government does not want to do it either. We are still telling them to support the industry as this is the minimum they can do.