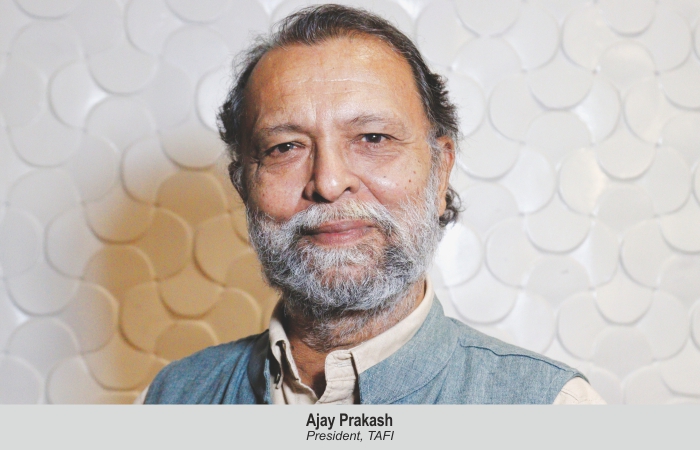 IATA needs to pull up its socks

Ajay Prakash, President, Travel Agents Federation of India (TAFI), says that some airlines are not giving capping to a large number of agents, which is bizarre. International Air Transport Association (IATA), therefore, needs to pull up its socks and tell its airline members to follow the associaton’s resolution.

The new team at the Travel Agents Federation of India (TAFI) has been busy rousing its members, International Air Transport Association (IATA) and airlines from the lockdown inertia. Ajay Prakash, President, TAFI, shares, “All the chapters are doing their meetings regularly now in physical format, finally after a long break. We recently conducted another chapter meeting in Kerala. We have also started having physical presentations for members from
different products.”

TAFI, also recently had an APJC meeting where a large number of long-standing contentious issues were discussed including the use of ADMs (Agency Debit Memo) and the issue of airlines not refunding agents on time. He says, “It was a positive virtual meeting where we really could get to cover a lot of issues. The airlines were quite receptive our suggestions.”

Though airlines not accepting cards from the agents is still a work in progress. “While some airlines are agreeable to this, there is a mechanism which IATA has also created called TIP – Transparency in payments where agents can register cards they would like to use on IATA portal. The airline can then approve them – or not. But a lot of agents are also not aware of this facility being available. This is another thing we are sharing with our members, that this is a mechanism that they ought to be using. When you have a greater number of agents registering cards, it also creates the ground work for us to take this forward with the airlines. It hasn’t happened yet, but it’s a work in progress and we hope that we will be able to get that going,” Prakash says.

There is also issue of airlines not giving capping to a large number of agents. That, explains Prakash, is detrimental to the membership because it compels them to necessarily buy tickets only from those agents who have capping on that airline. He says, “It defeats the purpose of an agent applying and getting IATA accreditation. We took this up strongly with IATA. Because the resolution is very clear – that the agency administrator is deemed to have the authority to appoint an agent on behalf of its 194-odd member airlines. If that is the resolution, then it needs to be definitely followed!” Prakash says vehemently. This issue, he says, will need follow-up because there are airlines that refuse to talk to agents, and have even cut off their inventory. “This means I can’t even see the airlines’ inventory online, let alone issue a ticket on it. That is bizarre! I am an accredited IATA agent and I ought to be able to issue tickets on an airline as long as they are insured,” he adds.

The president adds, “When a resolution is passed by the Passenger-Agency Conference, it is applicable on all agents. By that same yardstick, it is equally applicable on all airlines. So yes, IATA needs to pull up its socks and tell its airline members that they need to follow the IATA resolution.”

Sharing some initial plans for the association’s annual convention, Prakash reveals that this year, the team is looking at hosting it within India. He says, “We are talking to various state governments on the possiblilty of holding our convention within India next year. We would like to do a convention or a conclave or a congress in India which TAFI has not done. It is important that with the entire Dekho Apna Desh campaign, i think it is necessary for our members to explore newer destinations within India. We are talking to states to see where we can get some assistance. Hopefully, we should be able to plan something in India.”