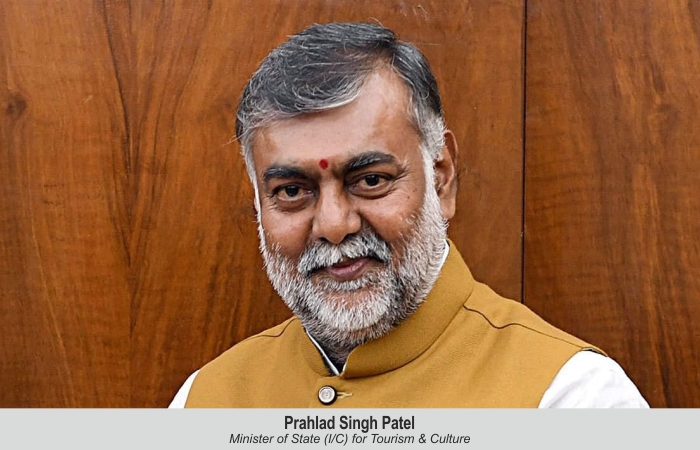 The slew of activities organised by Ministry of Tourism to celebrate the seventh International Day of Yoga aimed to bring to light the importance of the Indian heritage in a COVID-riddled and post-pandemic world.

Ministry of Tourism (MOT) recently concluded a slew of activities that it had organised to commemorate the seventh International Day of Yoga, with celebrations at 75 heritage locations across India. The day-long programme commenced at Red Fort in Delhi, where a live telecast of Prime Minister Narendra Modi’s address on International Day of Yoga was run, followed by Prahlad Singh Patel, Minister of State (I/C) for Tourism & Culture, performing yoga with Ministry officials including Arvind Singh, Secretary – Tourism and Rupinder Brar, ADG – Tourism. Programmes similar to the event at Red Fort were also organised at each of the 75 cultural heritage locations with the active participation of all institutions/bodies of the Ministry to commemorate 75 years of Independence under the ‘Yoga, An Indian Heritage’ drive that forms part of the ‘Azadi ka Amrit Mahotsav’ campaign.

Speaking on the occasion, Patel said, “Yoga is our greatest heritage. The Prime Minister has also announced that the world is getting the m-Yoga App, which will provide many videos of yoga training based on common yoga protocol, in several languages. This App will help all the people of this world to live a healthy and happier life.” Later that day, MOT organised a webinar titled ‘Yoga: The way of life’, which was graced by Patel along with Gurudev Sri Sri Ravi Shankar. Patel said that yoga has helped during the pandemic and is contributing to the well-being of people across the globe.

He also appreciated the role played by Ministry of Culture and all its organisations in spreading awareness about the importance of Yoga and making this incredible initiative a great success. Speaking at the webinar, the Minister said that the ‘Yoga for Wellness’ slogan given by the PM is being followed in all programmes throughout the nation. He further said that there is discussion around the world regarding post-COVID recovery. “The permanent solution for post-COVID issues is in India, in the form of Yoga, Ayurveda and Ayush,” he claimed.

According to Patel, there are three things that make India an incredible nation and have improved its perception across the world. “Firstly, it was the international recognition of Yoga and the UN declaring 21st June as International Yoga Day and everyone embracing it with full fervour. This took India’s stature higher in the world. Secondly, when COVID-19 was causing mayhem across the world, it was India which distributed essential medicines for nations in need, right from US to Brazil. This was despite India being a developing country. Domestic tourism in the country reached new heights as Indians explored places within the country. Even at the onset of the pandemic, foreigners visiting India preferred to remain here instead of going back to their own country because they felt safer here and trusted the ancient ways of medicine in India,” he said.

Patel added that after the second wave, the situation remains grim and all the ancient practices in India are in the minds of people. Quoting the PM, he said the journey from insanity or mental issues to charity can be done through yoga. “UN believes that yoga CDs should be made available to bring people out of depression and this is a big achievement for India, as the solution for all these problems is in India,” he shared.

Tourism Secretary Singh also shared the point of view of Gurudev Sri Sri Ravi Shankar on how to attract foreign tourists or promote India at an international level post the pandemic, by promoting India’s heritage & culture and niche products with a special focus on the Northeast region.