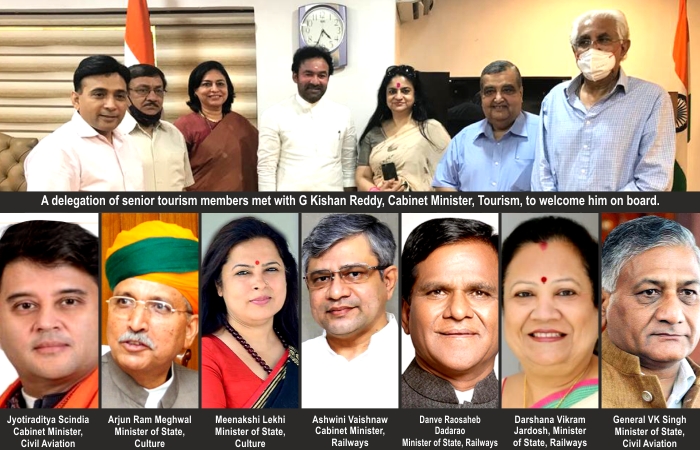 Right from the Ministry of Culture to the Ministry of Civil Aviation and the Ministry of Railways, there’s been a shuffle of authority with the new Modi cabinet being announced. The appointed ministers must now be a formidable force that takes the travel and tourism sector out of the rut that it has been in for the past year.

Jyotiraditya Scindia has been appointed as the new Minister of Civil Aviation. He takes the charge from Hardeep Singh Puri who had been at the helm of the Ministry of Civil Aviation since 2019. Scindia was a Minister of State with an independent charge for Power in the cabinet of Prime Minister Manmohan Singh from October 2012 until May 2014. Coming from an illustrious royal lineage, he has been in the public eye for over two decades. He has an MBA from Stanford University and a BA from Harvard University.

Another Minister of State, Culture, is Meenakshi Lekhi, who has been a Member of Parliament from New Delhi parliamentary constituency in the 16th and 17th Lok Sabha. She is also a lawyer in the Supreme Court of India. Lekhi has also taken the oath as a Union Minister of State for Ministry of External Affairs. The 54-year-old law graduate has taken up various important issues such as permanent commission for women officers in the armed forces, as a lawyer. She was appointed Vice President of the BJP’s Mahila Morcha in 2010.

BJP Rajya Sabha MP from Odisha, Ashwini Vaishnaw is the new Railways Minister. He has taken over the charge from Piyush Goyal. Vaishnaw will also head the Ministry of Electronics and Information & Technology Ministry apart from Ministry of Communications. He is a former IAS officer holding degrees from IIT Kanpur and Wharton Business School. Since June 28, 2019, he has been a member of the Parliament of India representing Odisha State in the Rajya Sabha.

BJP Lok Sabha MP for Jalna, Danve Raosaheb Dadarao has been made the new Minister of State for Railways post the latest cabinet reshuffle by Prime Minister Narendra Modi. He was a Minister of State in the Ministry of Consumer Affairs, Food and Public Distribution in the Modi 2.0 government formed on May 30, 2019. Dadarao won the Jalna Lok Sabha seat for fifth straight time in the 2019 general elections. Earlier, he has been a general secretary of Maharashtra BJP, and twice the vice president. Danve has been renowned as a leader with rural roots. He started his journey as a Sarpanch, and later became a MLA in 1990.

General Vijay Kumar Singh has become the new Minister of State, Civil Aviation. Since May 30, 2019, he had been serving as the Minister of State for Road Transport and Highways in the second Modi cabinet. He previously served as Minister of State for External Affairs in the first cabinet of the PM, and as Minister of State (Independent Charge) for Development of the North-Eastern Region. After his retirement from the military, Singh joined the Bharatiya Janata Party (BJP) in 2014 and was elected MP Lok Sabha for the Ghaziabad constituency. During his military career, Singh served as the 23rd Chief of the Army Staff from 2010 to 2012.