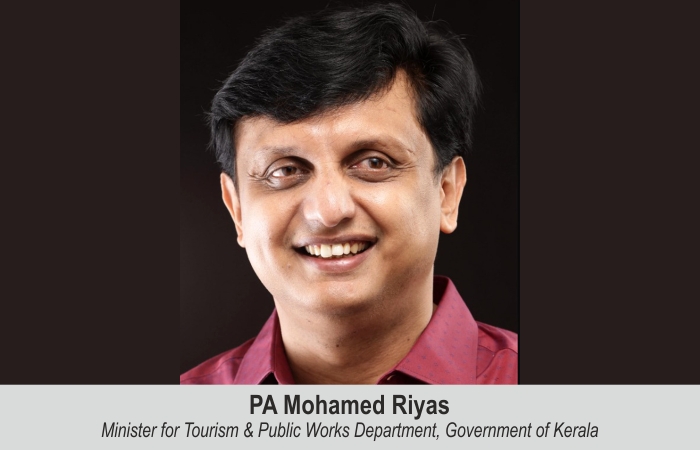 A high-level meeting presided by the new Kerala Tourism Minister PA Mohamed Riyas has decided on revival of the state’s tourism sector by rolling out new domestic tourism packages that encourage Indian travellers to visit destinations in the state.

In a bid to restart tourism in the state, PA Mohamed Riyas, Minister for Tourism & Public Works Department, Government of Kerala, has decided to finalise projects and implement them at the earliest so that people are inspired to visit the state and explore the wide range of offerings and regions there. “The initiative, which is being carried out considering that the pandemic will take time for authorities to promote international tourists, seeks to complete select tourism projects in the districts on a time-bound basis. Kerala Tourism will work in close association with allied departments by initiating sustained dialogues with all parties,” the Minister said. The meeting was also attended by Rani George,Principal Secretary (Tourism) and VR Krishna Teja, Director, Kerala Tourism besides top officials of Kerala Tourism Development Corporation.

“In a month, the various approval/classification schemes under Ease of Doing Business will go online. Authorities will draft new COVID-19 protocols for tourists arriving from other states. This will be done after tourism officials hold talks with their counterparts in the Ministry of Health,” Riyas added. One of the new schemes is expected to lay stress on the Responsible Tourism (RT) mission. The measures adopted under RT will be aimed at ensuring that the local population benefits from tourism while focus continues to be laid on their traditional and cultural values. The Department of Tourism also plans to work with the local authorities to determine how the people of the region can be empowered through tourism. A move in the direction is expected to be made by mid-June.

At the meeting it was also decided that senior functionaries and top officials will present project drafts that can help revive tourism in the state that has suffered a massive blow owing to the COVID-19 pandemic’s recent second wave. Kerala Tourism will also coordinate the functions of allied departments to develop a tourism circuit, and infrastructure will be accorded a more prominent status with a focus on building efficient roadways. Another key focus for the state would be the fairly less-explored Malabar region that has been on the state tourism department’s agenda for some time now.

Officials are also exploring long-terms projects that would benefit tourism in the long run. Riyas also recently held a meeting with stakeholders, assuring them that the government will unveil various projects focusing on the revival of the vital sector, including special marketing campaigns, and will work closely with the industry. He hopes that 2022 will turn out to be a “COVID-19 Free Tourism Year.”