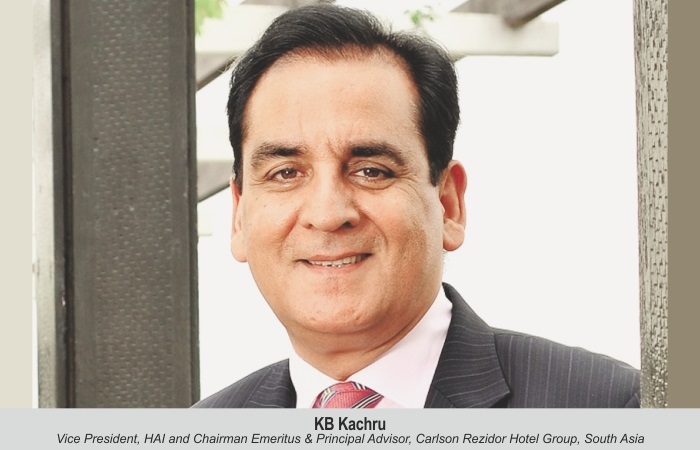 For KB Kachru, Vice President, HAI and Chairman Emeritus & Principal Advisor, Carlson Rezidor Hotel Group, South Asia, it is imperative that the Government gives infrastructure status to the hospitality industry as well as offers tax benefits and policy changes, so that the industry revives from the pandemic.

Mentioning that the Indian tourism and hospitality industry has suffered a lot, KB Kachru said “If they want this industry to survive, at least help us make some policy changes, which will directly and indirectly help the citizens and the industry at large. We made some suggestions to the new minister. We reiterated what we need to do to help our industry.”

He shared that currently, 40% of the inventory/hotels will close because they don’t have enough revenue to survive and pay for their loans and interest on principal. “Apart from this, we request the government to help us in operating them in a manner that such hotels can meet their justified expenses. Hotel industry has not been given infrastructure status, despite the same being given to automobile, manufacturing and other industries.
Not many people know that 9% of the GDP and 9% of employment is generated directly by tourism industry.”

Kachru insisted that if the government recognises the industry as infrastructure, “then we will get benefits, which include electricity and power being given at subsidised rates, which is far less than the commercial rate we are paying. We will get locations and it will help us in creating new destinations. Today, to be part of infrastructure, we must be on the concurrent lists of the government,” he pointed out.

Another request he added was to give moratorium for a longer period. “Giving 2-3 months moratorium is not going to help anybody. Government is asking us to take loans, but why would somebody take more loans when they can’t even pay the interest of the loans previously taken by them. Govt has also initiated ECLGS, but it needs to be more practical. Hotels are unable to avail this. Hence, we are requesting them to have a policy on moratorium for 2-3 years and a long-term policy on principal and interest.”

Also, they discussed the service export issue with the minister. “The SEIS is due to hotels for FY 2019-20 and 2020-21. The government is just sitting with it and the minister promised to consider it immediately,” revealed Kachru.

Kachru believes that all these issues, if resolved, will support tourism businesses to adapt and survive. “It will promote domestic tourism and ultimately support the return of international tourism. We also need standardised RTPCR policy and vaccination policies in place. Hence, we should look at constructive steps like vaccine passport or recognising RTPCR test for a certain period,” he suggested.

Stressing that they want to work with the government, he said, “There is a need for a national tourism board which should govern and help development and marketing for India properly. Our suggestions have been accepted well and the government has promised to do it. We have also pushed for PPP model, which they are keen on adopting.”

On tourism minster announcing to talk about the inclusion of tourism in the concurrent list, Kachru said, “The intent is very good, and they have promised to process it as well. However, it will depend on a lot of specifics, and we are quite optimistic since it’s the first time this has been taken seriously.”