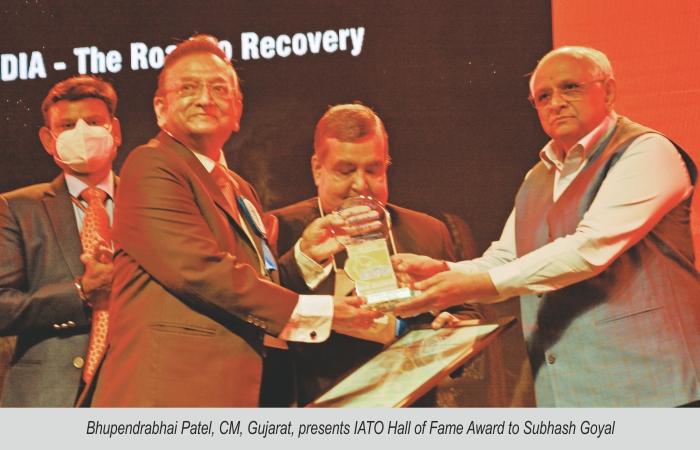 Subhash Goyal, Founder Chairman, STIC Travel and Air Charter Group, has been conferred with the Hall of Fame Award at the 36th IATO convention.

Subhash Goyal holds the record for being the longest standing President of IATO. On receiving the IATO Hall of Fame Award for his contribution, his continued mentorship and exemplary service, he thanked IATO and credited his team and his wife for their undulated support.

“I am overwhelmed with gratitude for the honour that has been bestowed upon me. I would like to thank the Office Bearers & EC and members of IATO who decided to confer this honour on me. I would also like to thank my wife Gursharn Goyal, who stood by me like a rock. I would also like to express my gratitude to all the Past Presidents and EC Members, particularly those who are no longer with us,” he said in his acceptance speech.

“I don’t think I did so much, as I only motivate people to do it. It’s been a happy and interesting journey and I am grateful on receiving this honour. At the same time, getting a lifetime achievement award doesn’t mean that it’s retirement for me. I am never going to stop working, and like a soldier I will fight till my last breath.

Even now, in my individual capacity, I have written to and met with many people in various ministries to resolve the issues of the industry. Till the last day of my life, I will continue to leave no stone unturned to make India, realise its true potential of being the greatest tourist place in the world and through this we will be able to create millions of jobs, eradicate poverty and make India, the country of dreams,” he says.