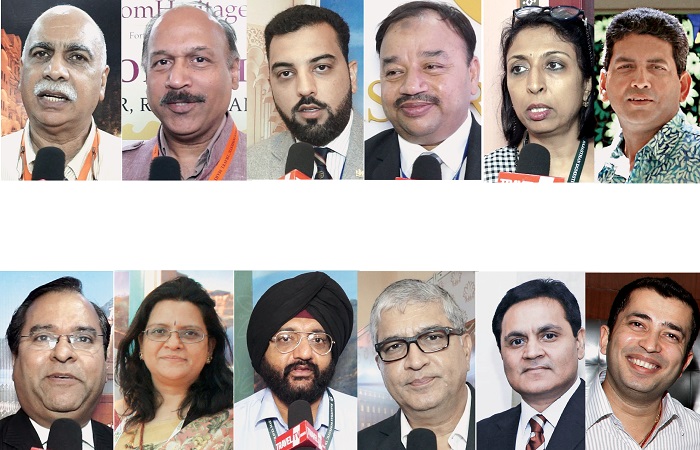 Both buyers and sellers engaged in back-to-back meetings and networking sessions at the first edition of Rajasthan Domestic Travel Mart (RDTM). While many say that the focus on domestic tourism was much needed, others believe that domestic business is going to surpass the growth of inbound in India.

Domestic tourism is of prime importance today, as with the international economy slowing, inbound business rates are going down. It is, therefore important to look into our own yard as we are brimming with plenty of tourism scope. We wanted to professionalise the domestic market. We have been very rigid about having the appointments and have also taken a security deposit from every agent which will be returned once they complete 95 per cent of their meetings.

The idea of RDTM was conceived about three years back. There were many marts in India and a lot of stress is being laid on international marts. Hence, we decided to look at the domestic mart. Rajasthan is seen as an off-season time during the summers, but summers is the time when most of Indians are travelling. Hence, we wanted this mart to give it a fillip. The government supported us and funded this project. Hence, there is a very minimal charge being taken from people who are participating at the mart. Agents have come from all over the country, and we are hopeful that participants would get good mileage out of this.

There was a huge vacuum as far as domestic travel was concerned and now we are glad to be able to have a forum based out of Rajasthan. We are now able to have one-on-one meetings, which are more intense and quality-oriented with all the people based out of Rajasthan. There’s a lot that the country has gone through in the last couple of years. This event has come at the right time to take that boost forward and especially at a junction when the season is just about to begin. It will take some time to settle down, but I think that a journey of a thousand miles always begins with the first step. I am glad that the first step is being taken in this direction.

RDTM would be a flagship mart for Rajasthan domestically. It is going to give a real boost to the domestic travellers coming in and domestic business coming into the hotel. In the coming years, this would be much bigger than other inbound marts as well. The inbound tourism is getting thinner while domestic tourism is increasingly on the rise. We are focusing majorly on MiCE and weddings as we observe a rising trend among domestic travellers in this direction. This mart can act as the perfect catalyst and platform to enhance these factors.

As a maiden mart, RDTM has been organised very well. The list of sellers is very interesting; there are also some upcoming new properties and hotels. This is the best way that exhibitors can showcase their products under one roof. I am dealing in the luxury and niche market, and I would perhaps be very happy to see some new products and experiences which I would be looking at promoting. I think experiences is something that the traveller requires now for the domestic market. Having been familiarised with Rajasthan as a tourist state, I am looking at some new products and takeaways when I leave the state.

If you look at the fairs in the last five years, inbound business is probably growing at about 10 per cent and the domestic market is growing at over 20 per cent. Hence, I think it’s only logical that states and industry have more focus on domestic market than on the inbound. What impressed me here is the quality of the booths. I am equally surprised to see the number of properties which Rajasthan has got on the first floor. I never realised that in the last two-three years, many new properties have emerged and it’s good to see that all of them are here today focusing on domestic tourism in the state. There has been a reasonably good mix of buyers from across the country.

It’s a terrain that everybody would like to walk and have a pie of. The organisers of RDTM have a good database of the unstructured partners as well. We are delighted to meet them. It’s very early to say how much suspect leads would be converted into prospect business, but nevertheless, I look forward to it. In fact, a lot of effort has been made to get buyers from hinterland markets and Tier II and III cities. We do not have reach into those markets, and thus it’s a good initiative for us to connect with them, especially the neighbouring states like Gujarat, Madhya Pradesh and Chhattisgarh.

An event like this was much required and it has finally taken shape. It is perceived as the beginning of something big. We looked at the buyers very specifically and concentrated on those who are doing domestic with a lot of outdoor activities and experiences. Indians are now looking for experiences and adventures. Hence, we wanted something similar on these lines and we are getting the kind of people. A lot of them are already associated with some of the properties. Hence, I am confident that the relationship would only get better.

This is a great initiative by Federation of Hospitality and Tourism of Rajasthan (FHTR), and it is the first time that such an event is happening. The Rajasthan Domestic Travel Mart is an excellent platform for promotion of domestic tourism. The exhibition is of good magnitude and we indeed had some very good interactive meetings. It’s a win-win situation for not only the sellers but also buyers. For me, it is a good proposition as a businessman and as the Chairman of associations as well. I would definitely like to have such kind of events in my region as well.

RDTM is an excellent opportunity for domestic tour operators because this is a private and government joint effort happening for the first time in our country. Domestic tour operators finally get recognition. I met more than 80+ suppliers in Rajasthan. It is a good platform to create and network. At Veena World, we do more than 250 groups in Rajasthan in a year for domestic tours and we are happy to have started with MiCE as well as inbound. So this will be very useful to all of us. RDTM is a great platform to meet all our stakeholders under one platform.

The inaugural edition of RDTM has been very fruitful. This is a great opportunity for us to network with the travel partners, hoteliers, wedding planners and hotels in Rajasthan. Domestic business is a 365-day business. Even in summers and off-season, which is considered low season for Rajasthan, the numbers have increased. Weddings is one big segment in Rajasthan and I believe all states would organise these kinds of marts to promote domestic tourism and other related activities. I have been able to reconnect with all the partners and small havelis, which were beyond my access.

I congratulate the organisers for holding this mart. Inbound is there of course, but if you see the numbers, domestic tourism is growing manifold than inbound. Hence, I would request other states also to come forward and hold this domestic mart. For the first time, the event has been organised very well, barring a few loopholes. There are some issues with the appointment system and number of appointments. The exhibitors are little less, buyers are little more and slots they allotted to each buyer is 40. Hence, people have empty slots in their appointments sheets. I believe the team will work on it and the second edition would be bigger than what it is.