Aiding the trade is a priority 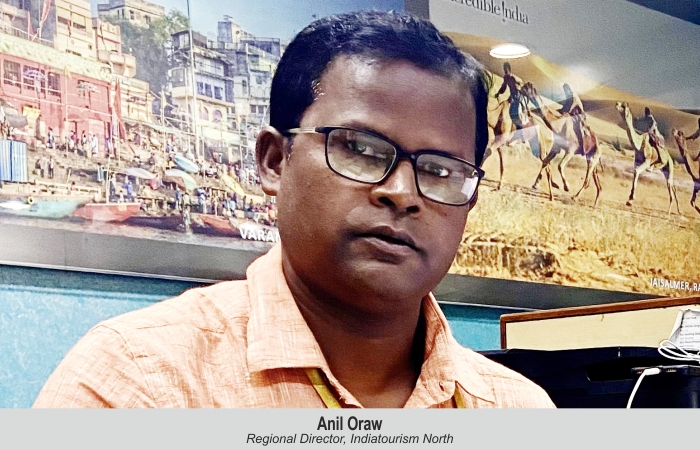 Anil Oraw, Regional Director, Indiatourism North, believes that in the last 1.5 years, the travel patterns across the world have changed, with almost no travellers from overseas. Hence, on Ministry of Tourism’s advice, Indiatourism North has taken a few initiatives to facilitate better traffic.

Anil Oraw shared that they are trying to focus on domestic travellers, who have great potential. “They are economically sound and have disposable income, and we not only promote known destinations, but focus on lesser-known or unknown destinations, festivals and some adventure circuits as well through our webinars,” he said. He added that it is possible for states to attract tourists by offering them incentives. Another step they have taken, especially during the pandemic, is to build the confidence of people. “This has been done following the protocols issued by MOT & MoHFW, and instructions from Disaster Management. We ensure that these protocols are maintained by the hotels and by tour operators. We also tried to connect the tour operators in various manners, which resulted in increasing the tourist flow between the states,” he adds.

Working with the trade

Claiming that one of the key focus areas for them was to start supporting the travel trade and any stakeholder approved by the MOT, or by the state governments, Oraw said, “We are supporting the tour operators through the Marketing Development Assistance (MDA) scheme, by reimbursing 90% of the cost of their travel if they go on a sales call within India, twice a year. Under this, we will provide the airfare, accommodation, transportation expenditure, after submission of bills and papers on return by reimbursing the cost. This policy has been modified now, as it earlier covered agencies approved by MOT. However, now it is available to all tour operators or stakeholders approved by the state or UT, twice within India across all states. In case they are travelling to Northeast and Ladakh, they can avail the scheme thrice in a year.”

Apart from that they also organised inter-state roadshows. “We invited tour operators from one region to other regions. Indiatourism Delhi had organised a roadshow by inviting tour operators from Bihar and UP to Shimla, where they did B2B meetings with tour operators of Himachal Pradesh. Such exchange programmes were organised by other Indiatourism offices too.All costs of these programmes were borne by the MOT,” he informed. They also organised exchange programmes for students. “Under the ‘Ek Bharat Shreshtha Bharat’ scheme, we targeted the students of Indian Institute of Hotel Management and Catering Technology, which comes under the MOT. Under the programme, for example students from J&K went to Tamil Nadu and Telangana students came to Haryana. When Telangana students visited Haryana two roadshows were held in IHM Panipat, where students from both states displayed the cuisine, dressed in traditional costumes, performed different dances and cultural shows, so that they had a complete heritage exchange. People from nearby areas and parents of the students were also invited. Expenditure for these programmes was also borne by us. The vision behind it was that the students could motivate parents to go to Haryana or Telangana. Hence, it was indirect selling or promotion,” he shared.

With respect to the tour operators, they had video meetings with them, to ensure all protocols are maintained and a positive image is created for the tourists and instil confidence. “We have asked the tour operators to promote that our drivers and guides are vaccinated; the hotels they are going to stay has its staff vaccinated and the rooms are thoroughly sanitised; so that potential visitors know that they are with somebody safe. There also needs to be an assurance that there is 24 hr medical support during the tour. Such assurance is also given by the tour operators to the clients, who get 100% surety they and their families are safe,” he added.

Also, he stressed that today people prefer booking after personal interaction with a physical tour operator instead of making online bookings. “This gives 100% assurance and ensures safety of the tourists and their families,” he stressed.